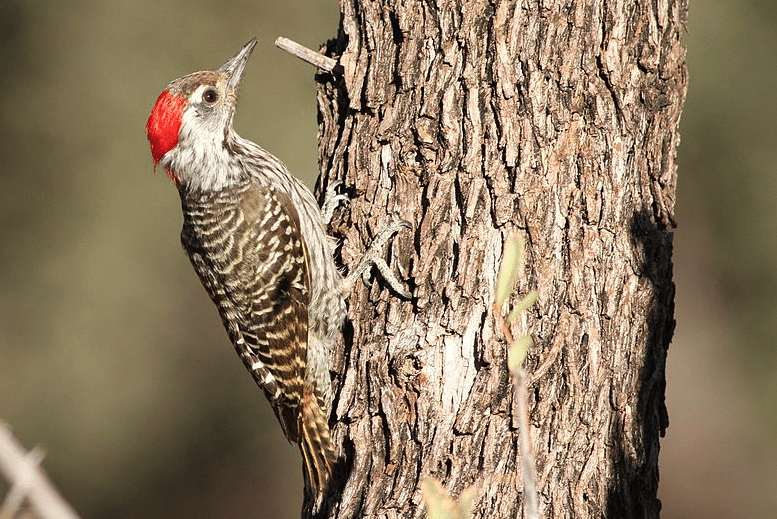 Posted at 07:04h in Wildlife by Mike Cadman

Woodpeckers are more common than many people realize but even if you have not seen one in the wild large numbers of people have childhood memories of energetic ‘cartoon woodpeckers’ furiously bashing their bills against trees, sending clouds of woodchips flying everywhere.

And it is this habit, perhaps somewhat exaggerated in the cartoons,  which makes these birds so interesting. How do they not develop brain damage, or at least severe headaches, when they spend their whole lives acting as avian chisels?

When the birds peck at the wood they do so with considerable force only to have the forward motion of the head regularly stopped instantly by impenetrable bits of wood, a deceleration that under normal circumstance could damage the brain. And they do this thousands of times a day.

To counter this threat woodpeckers have evolved a number of special adaptations that work together to dissipate the force and cushion the brain.

One such adaptation is that they have developed a very long hyoid bone, which is really a mixture of cartilage and bone, which loops from the back of the bill around the inside of the bird’s skull and ends near the right nostril This, supported by special muscles, acts as a “safety belt” and helps protect the brain from the shock of repeated hammering. Much of the bone, particularly at the front and back of the head, is spongy, a feature which helps absorb the force of the pecking. (Humans also have a hyoid bone which helps guide the tongue when swallowing).

A secondary purpose of the unusual hyoid bone is that it allows the very long tongue to be safely stored out of harm’s way while the bird is hammering away at branches.

In addition, these birds have a relatively small cranium with limited amounts of cerebral fluid which helps prevent the brain from shifting backwards and forwards within the cranium while the bird is pecking. The bony tissue around the bill is also spongy, further assisting in dissipating energy and protecting the brain.

Woodpeckers also have a special membrane which slides over the eye to help protect it from flying chips of wood.

Another interesting adaptation is that they have zygodactyl feet which means that the first and fourth toes point backwards and the second and third face forwards. This allows them to establish a very firm grasp on tree trunks, which is further supported by their very firm tails which offer additional support while they bash away. (Most birds have one toe pointing backwards and three pointing forwards).

Together these adaptations also help dissipate the force of the repeated hammering.

Woodpeckers occur globally but are absent from Australia, New Zealand, Madagascar and the polar regions.