Leopards and their prey

Home / Wildlife  / Leopards and their prey 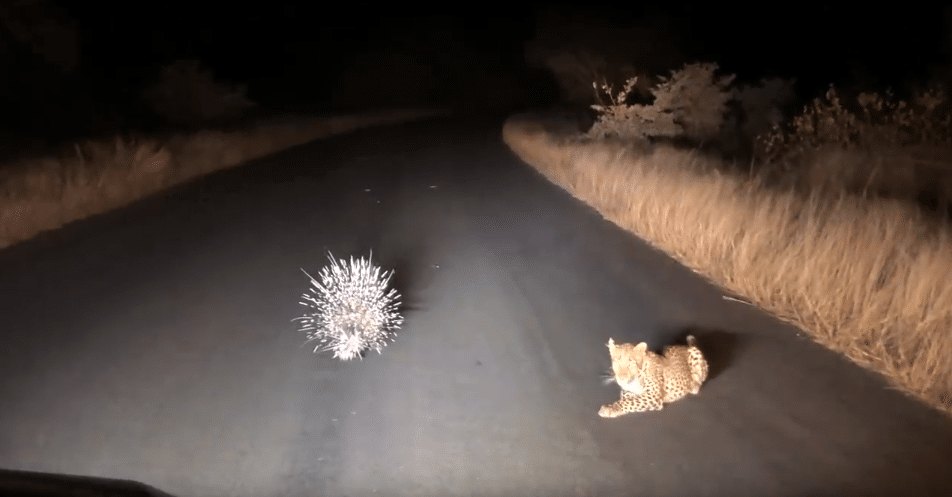 23 Sep Leopards and their prey

Posted at 07:01h in Wildlife by Mike Cadman

In August Seolo Africa regional manager Gerrit Meyer filmed a fascinating interaction between a leopard and a porcupine on a road close to our Rhino Post Safari Lodge in the Kruger National Park (KNP).

The young leopard was trying to figure out how to eat the equally juvenile porcupine which, in turn, was just as seriously working out how to avoid being eaten.

Gerrit’s footage, which was posted on various social media platforms has been viewed a phenomenal 385 000 times on the Africa Geographic Facebook Page, 129 000 views on Seolo Africa’s Facebook page and YouTube Channel and attracted over 255 000 views on the Caters News YouTube site.

The video has prompted many people to ask whether a leopard attacking a porcupine is unusual and others wondered which animals are the leopard’s favourite prey.

The answer is that leopards regularly kill and eat porcupines and generally prey on whatever animals or birds they feel capable of overpowering, including large antelope heavier than themselves. They have been known to catch barbel (catfish) and will even eat creatures as small as mice or insects.

Gerrit, who has lived and worked in the KNP for 27 years says that the animals in the video were young and it, while it may appear that they were playing the interaction, was anything but friendly.

“Predators usually act quickly and instinctively, with equal urgency displayed by the prey. However, when prey doesn’t immediately take flight or run away, this goes against the norm and is very intriguing to the predator,” Gerrit says. “Even with the leopard’s limited experience, dealing with prey that is neither aggressive nor fleeing, is an anomaly.

“Both these young animals appear to have had to start problem-solving instead of instinctual fight or flight. The leopard can see that this creature is alive, can smell that it is food, but can’t get to the meal, so has to try tactics that it is not likely to have ever used before,” Gerrit notes. “It doesn’t take the leopard long to figure out that the defences (quills) are dangerous – or at the very least painful, but also that they do not appear on the underside, so it tries to slip its paw (and sometimes even its face!) under the porcupine to flip it over to get its mouth on the area it suspects has no defences”.

The porcupine, on the other hand, keeps turning in order to present its tail quills (which are the longest) towards the leopard, keeping it at the furthest possible distance and it seems to instinctively know that running is not an option,” Gerrit says, “What’s particularly interesting in this standoff is that although both the participants are juveniles, they manage the process in a very cautious manner, resulting in no harm to either”.

Porcupines, Africa’s largest rodent and the second-largest rodent in the world, make formidable foes and many a predator, including lions, has ended up quills stuck in their faces or paws. The quills sometime fall out easily but they can cause nasty wounds which, if they become infected, inhibit the predator’s ability to hunt and extreme cases can result in death.

Leopards are amongst the most versatile of the large cats and live in habitats as diverse as the Kalahari Desert, mountain ranges or humid forests and adapt to eating what prey is available in their area.

Leopards vary in size according to where they live: male leopards living in the Western Cape in South Africa only weigh about 30 kg whereas its counterpart in Zimbabwe can, exceptionally, tip the scales at 90 kg.

Research shows that most leopards prefer taking prey, usually antelope, in the 10 -30 kg range. In South Africa, impala is a favourite prey species and although females usually weigh a maximum of 40 kg males can reach 70 kg.

Leopards have been recorded killing and eating bushbuck, duiker, kudu, steenbuck, tree squirrels, Vervet monkeys, pangolins, genets, mongooses, Nile monitors (leguaans) and a variety of other creatures. Although baboons are taken they are not usually a common prey species.

Leopards have also been known to eat a wide range of birds including ducks, francolin (spurfowl) and guinea fowl.