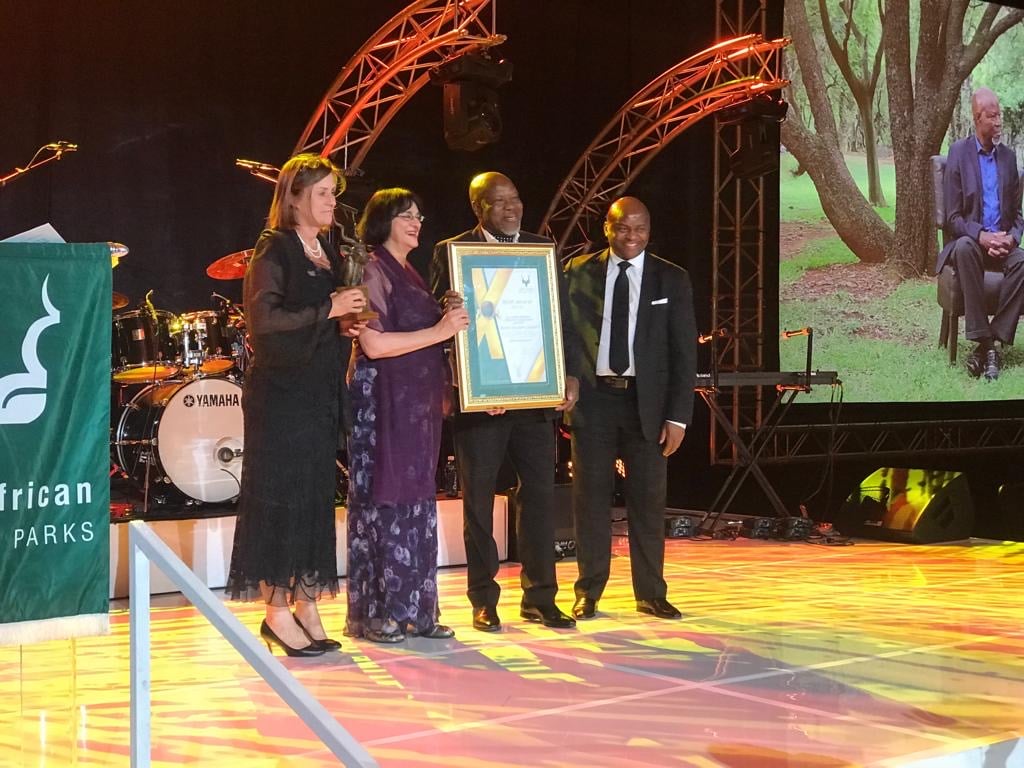 Seolo Africa is extremely proud to announce that South African National Parks (SANParks) has awarded our very own Rhino Walking Safaris (RWS) the prestigious 2018 Business Partner Kudu Award. The award recognises a combination of the best year-on-year business growth of all public and private partners (PPP) and their relative financial contribution to SANParks.

Jann Kingsley, a director of Seolo Africa, and CEO of RWS said the achievement is a testament to the hard work of every member of the team at RWS. It is the second time RWS have won the award in seven years.

“We are very excited by the award which is the result of dedicated hard work,” Jann said after attending the awards ceremony held near Johannesburg on 17 November.

The ceremony was attended by Derek Hanekom, Acting Minister of Environmental Affairs, Fundisile Mketeni, SANParks CEO, sponsors, winners of Kudu Awards in other categories and various other stakeholders.

“We have had an incredibly long-serving staff and solid team at RWS since its inception in 2002,” Jann said. “It’s something we’re justifiably proud of, and it shows in the work that they do and in the corresponding contribution that we have been able to make to conservation through our partnership with SANParks.”

“We would also like to congratulate all the other winners of Kudu Awards and the Chief Executive awards,” Jann added. “Wildlife tourism and conservation are closely linked and with good team efforts, and as small cogs in a very large wheel we are all able in our own small ways to contribute to the sustainable management of our wild places.”

RWS, comprising Rhino Post Safari Lodge and Plains Camp, is located about 20 kilometres from the Kruger National Park’s (KNP) headquarters in Skukuza. RWS is based on a 12 000 hectare private wilderness concession entirely within the KNP in an area well populated with the Big 5, where guests undertake game drives from Rhino Post Safari Lodge (a 16-bed lodge) and walks from Plains Camp which has 4 luxury African explorer-style tents. The more adventurous can also enjoy a night out under the stars at the Sleep-Out decks on the concession.

Nikki Meyer, Seolo Africa Regional Operations Manager, said that she and her colleagues were proud to have won the award for a second time.

“We are delighted not only because it is a significant recognition of the team effort by our staff and management but more importantly because this platform helps us spread the message of conservation,” Nikki said. “It is vital that all businesses grounded in conservation contribute to the financial sustainability of conservation and ensure that local communities feel the direct benefit thereof, giving them a stake in conservation and encouraging them to protect these precious areas for future generations.”

“Conservation is the core of our business and SANParks, specifically the KNP, is essential to our success. Central to our decision making is the question ‘how would this affect the Kruger Park?’ We want not only our staff but also all of the neighbouring communities to feel the same way,” Nikki added.

“Without the KNP we would not have a business and what is in their best interest is in our best interests. We were really touched by the theme of the awards evening ‘I am SANParks’ and in accepting the award would like to join them in saying: we too are SANParks.”