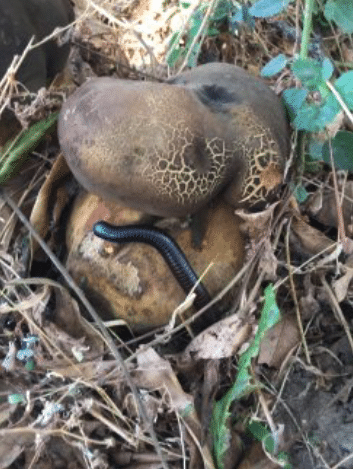 Posted at 09:51h in Chundu Island, Wildlife by Mike Cadman

It’s not often that a mushroom scoops the ‘sighting of the month’ at Chundu Island, or at any lodge really.

The honour usually goes to the ‘megafauna’ like elephants and lions or perhaps something unusual like the hard-to-find Pel’s Fishing owl but in December staff at Chundu were astonished when a large mushroom, a very large mushroom indeed, grew from a termite mound under an Ana tree (also known as an Apple Ring tree) right in front the of the main lounge deck.

And everyone’s astonishment was well justified – the mushroom, a species known as Phlebopus collusus weighed a massive 3.86 kilogrammes  (8 pounds 3 ounces) which according to Zimbabwean mushroom expert Cathy Sharp is a record for Zimbabwe. The previous record was 3.5 kg.

“The Phlebopus fungus is one of the ‘boletes’ or ‘sponge fungi’ related to the ‘Cep’ (Boletus edulis) which is common in Europe and is found under exotic pine trees in our Eastern Districts,” Cathy commented. “There are three huge, indigenous species in this group and Phlebopus colossus is literally colossal. It has a very dark brown cap and the tubes underneath are yellowish and spongy”.

Cathy said that finding this species growing under an Ana tree was unusual because this has not been recorded before.

There is much intrigue involved with the three species: P. colossus, P. sudanicus and P. portentosus. It is not certain if these three are all ‘ectomycorrhizal’ – having connections with certain tree roots,” Cathy said. “Over years of observations it certainly seems that P. colossus is associated with the Marula tree and has even been given the name ‘dindindi mapfura’ (Mapfura is the Shona name for a Marula tree) which shows that it is known to grow with that particular tree”.

“However, the Chundu collections were growing at the base of Faidherbia albida (Apple Ring Acacia) and although other collections from around Zimbabwe have come from other acacia species, there is the possibility that it’s not so choosy about its host tree,” Cathy said” “Closer study of the root-tips under the microscope and a look at the spores will all help in solving the questions that come to mind”.

Cathy said that in Europe people eat most of the boletus species of mushrooms that grow there but due caution is needed with our indigenous African species, adding, rather dryly, that “It is worth remembering the Czech quote ‘All mushrooms are edible, some of them only once!’

And of course, there is also the question that nearly everyone asks when a mushroom is seen growing in the wild – is it edible?